The 6 Best Inflatable Kayaks For Whitewater In 2020 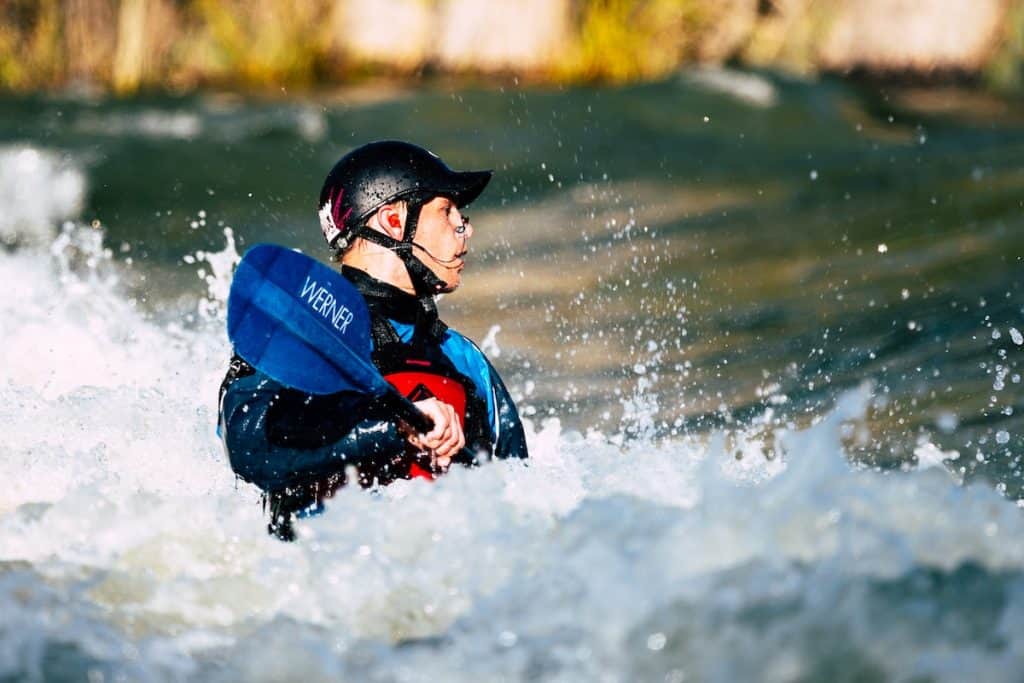 Inflatable kayaks are incredibly durable, portable and buoyant and so can make great kayaks for going whitewater rafting. In this guide we’re going to cover all the different things you need to consider when looking to buy one as well as reviews of what we think are the best inflatable kayaks for white water in 2020. Let’s get started.

The Top Inflatable Kayaks for Whitewater

If you’re in a rush, here’s our favorite inflatable kayaks suitable for whitewater. We’ll cover them in more detail later on.

Before we cover the kayaks that we think are best for whitewater we’re going to cover some of the features and questions you need to consider before buying one.

Are Inflatables Good For Whitewater?

The first misconception is that inflatable kayaks aren’t any good for whitewater rafting but that couldn’t be further from the truth.

First of all, inflatable kayaks are highly durable, they can even compare to some hardshell models. What most people don’t realize is that inflatable kayaks nowadays are rather tough and stable on the water thanks to their construction.

Most models are are made using strong, hard-wearing materials that effectively resist punctures, so they’re not nearly as fragile as you’d think. The flexibility of inflatable kayaks also makes them less vulnerable to damage from collisions with obstacles.

Another great reason that inflatables can be good for whitewater is that they’re incredibly portable and compressible. This means you can deflate the kayak and fold it down into a very compact package, which allows you to effortlessly move it from one place to another or fit it inside your car to get to more remote launch sites.

Being so lightweight, inflatable kayaks are also very easy to take to the water’s edge. This is a huge plus for whitewater kayakers because hardshell kayaks are often quite heavy and rigid, which makes them difficult to carry for long distances and a hassle to transport by car.

Important Features To Look Out For

When choosing a kayak for whitewater and rapids, durability should be at or near the the top of your priority list.

It’s understandable why durability is a major concern for a lot of people interested in inflatable kayaks, after all, this is a kayak full of air that’s supposed to go up against harsh currents and possibly clash with rocks.

This is exactly why inflatable kayaks are made using extremely thick anti-puncture materials that are much tougher than you’d see on other types of inflatable products.

Consequently, these kayaks are highly durable and are built to withstand serious contact with rocks and other sharp obstacles. Check out the video below to see how strong they really are.

Despite the massive amount of protection offered by the strong construction of inflatable kayaks, the probability of getting punctures should never be overlooked. The risk is always there, so it’s a smart idea to come prepared.

A particular feature that makes inflatable kayaks well suited to whitewater is having multiple inflation or air chambers.

There are several advantages to owning a model with multiple air chambers, the most obvious one is serving as a back-up in case one of them gets punctured. This prevents the air from escaping outside the whole structure of the kayak so it stays afloat.

Having multiple inflation chambers also boosts the overall rigidity of the kayak’s construction, which positively affects the stability and performance it delivers out on the water.

An inflatable kayak featuring only one air chamber is more likely to bend in the middle, kind of like a beach lounge seat. This leaves you with a flimsy kayak that’s hard to maneuver and slow to gain speed.

Scupper holes are one of the features that’ll surely come in handy on an inflatable kayak, especially if it’s meant to take on whitewater. With the splashes that are guaranteed to happen, it’s very likely that you’ll end up with water getting into your kayak.

This is where scupper holes come in; these structures will help drain out water so it doesn’t build up inside your inflatable kayak to the point of sinking.

For the same reason, kayakers almost never need scupper plugs on an inflatable whitewater kayak because it’s simply inevitable to have loads of water raiding your kayak.

Some people use a kayak bilge pump to manually remove water from their boats. While they’re easy to figure out, these pumps are highly impractical on whitewater because your hands will be busy and you won’t be able to steer the kayak.

Scupper holes, however, will do the draining work on their own so you can keep steering without worrying about the water entering your inflatable kayak.

As mentioned above, portability is one of the biggest advantages that inflatable kayaks have over hardshell models.

Hardshell kayaks are known to be difficult to carry or transport, but on the other hand, inflatables kayaks are remarkably portable due to their lightweight construction and the fact that you can deflate them down to a small size. This allows you to reach more remote locations with much less effort.

Of course, these kayaks won’t be as light as a mere pool inflatable because of the very thick materials used to give kayaks resistance against punctures and collisions.

Keep in mind to look for a kayak that inflates and deflates quickly to save yourself the waiting time. For added convenience, consider buying a sturdy carrying bag to make transportation in and out of the water easier.

Inflatable whitewater kayaks are designed for, well, whitewater. But not all of them will deliver the same performance out on the rapids. Whitewater is a broad term that describes any river with enough turbulence to create a bubbly current that appears white.

But not all rapids are created equally and there is a classification system to determine the severity of them. There are six difficulties ranging from Class I (the easiest) to Class VI (the most difficult). Here’s a simple breakdown of the classes:

Under each class, there are subcategories to further describe the rapids. You must refer to your inflatable kayak’s specifications and check if it meets the grade of rapids you plan to conquer.

Now that we’ve covered some of the things you need to look for in an inflatable kayak for whitewater, we’ll take a look at some of the ones we recommend in our inflatable whitewater kayak reviews section. 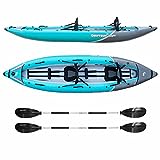 If you’re looking for one of the best-rated kayaks for white water rafting then we’d suggest trying the two-seater Driftsun Rover 220 inflatable kayak. It’s designed specifically for white water and can handle up to class III and IV rapids. It’s built with very strong and durable reinforced layer PCV that provides two layers of protection so it can bounce off rocks and other obstacles that you’re likely to encounter on a river. Despite being made out of strong PVC it’s surprisingly light weighing in at only 28lbs making it very easy to transport and take to more remote locations without the need for trolleys or a second pair of hands to help.

When you’re in the water it performs very well with good tracking and stability. It comes with two adjustable seats that are very comfortable giving you great back support with footrests too that could be better designed but are still very handy. If you’ve been in whitewater then you’ll know that a lot of water can get in the yak but the Rover 220 has self-bailing plug holes that let all the water out (without letting any water in) like magic. And we also love that it has a camera mount at the front of the kayak to film everything for posting on YouTube later. 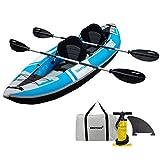 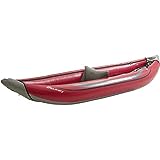 If you’re considering getting an inflatable kayak for your white water trips you’re in good company. More and more people are opting for them due to their great durability and portability. If you’re not sure which one to go for, we’d recommend the Sea Eagle 300x Explorer or the Driftsun Rover 120/220. Considering the price and all its features we think they’re two of the best value for money on the market today and it gets great reviews. Check it out by clicking the button below.

The 6 Best Inflatable Kayaks For Whitewater In 2020

The 5 Best Inexpensive Kayaks in 2020